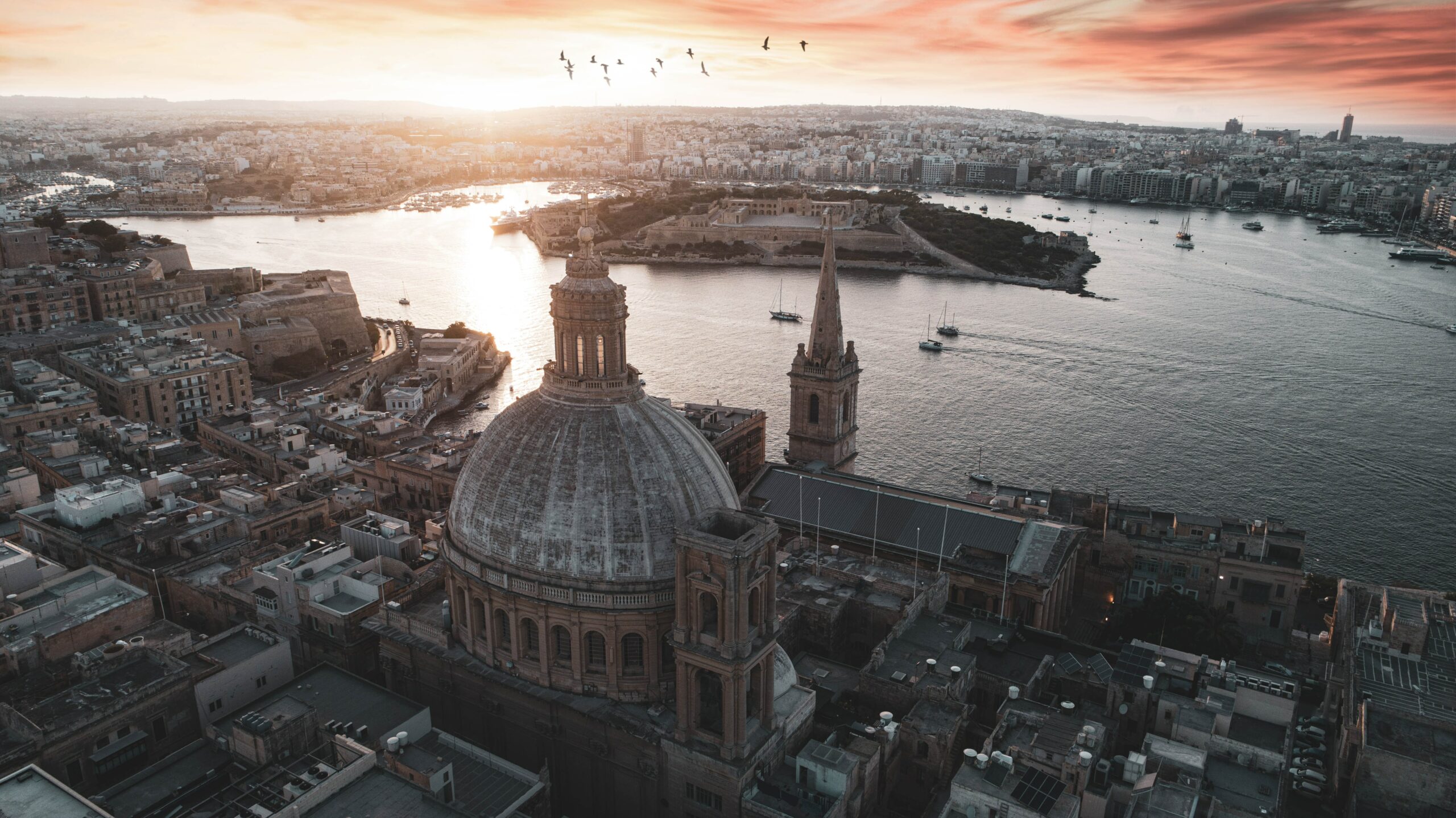 A mix of culture and traditions in the different districts in Malta and Gozo makes Malta unique. Learn about the different Maltese districts which will help you identify the best districts for you to visit when on holiday or live in.

Centred on Malta’s capital city of Valletta, as well as Floriana and the Three Cities of Birgu, Cospicua and Isla, the Southern Harbour district has quickly become one of the most desirable areas of the island.

Valletta has undergone spectacular regeneration in recent years and is now one of the most prestigious addresses for property in the country. As the administrative centre of Malta, the capital is a well-preserved Renaissance city, with baroque palazzos, charming streets and open squares, full of bars and restaurants, high-end shopping, museums and theatres. Great transport connections include the main bus terminal and quick ferries connecting the city to Sliema, the Three Cities and even Gozo.

Property here is mostly traditional, with luxury converted townhouses and houses of character, some transformed into highly finished apartments and penthouses. Prices can be very high, but it’s possible to find something more affordable in Floriana, a bustling suburb minutes away known as Malta’s ‘garden city’ for its abundance of green spaces.

Across the majestic Grand Harbour and connected to Valletta by a quick ferry are the so-called Three Cities, including Birgu, a medieval port town with narrow streets, historic buildings and a spectacular waterfront, as well as the rapidly up-and-coming Cospicua and Isla, where it is still possible to find a range of traditional and modern properties at reasonable prices. Slightly further afield is the large residential town of Paola, with a high street and large square offering shopping and more, within easy commuting distance of Valletta.

The Northern Harbour district incorporates some of Malta’s most vibrant and urbanised towns, including Sliema, St Julian’s, Gżira and Birkirkara, as well as quieter suburb areas like Pembroke, Swieqi and Ta’ Xbiex.

Sliema, St Julian’s and the surrounding areas have long been popular with locals and expats for their bustling sense of activity, with plenty of bars, restaurants, clubs, shopping centres and offices, hosting major businesses and a large international community. The towns are connected by a popular seaside promenade with abundant public gardens, swimming spots and beach clubs while the nightlife hub of Paceville is also close by.

You’ll find traditional townhouses and high-standard converted houses of character mixed with a huge variety of modern residential developments, including apartments, penthouses, and new luxury high-rise buildings. Attractive terraced houses and large villas can be found in the quieter areas of Swieqi and Pembroke, just outside the main urban centres, which allow you easier access to the open countryside to the north while still being close to all amenities.

Because of the high demand, property prices in this region can be among the most expensive on the island. More affordable prices can be found in Birkirkara and Ħamrun, large residential towns with bustling high streets, as well as San Ġwann and Santa Venera. With great public transport links, these areas are all just a quick hop from Valletta, Sliema and St Julian’s, as well as the University of Malta and Mater Dei Hospital, making them well worth a look.

The South Eastern district features a number of attractive seaside towns including Marsascala, Birżebbuġa and Marsaxlokk. Growing out of old fishing villages and summer towns, today they offer a variety of traditional and modern properties, a huge array of beaches and swimming spots, quick access to the countryside and an easier pace of life than the more densely populated harbour regions.

The fishing village of Marsaxlokk offers a beautiful bay dotted with characteristic brightly coloured fishing vessels and a thriving weekly fish market that recalls the traditional way of life and serves the many fantastic restaurants that line the seafront. Nearby is the wild coast of Delimara, with country walks and the popular St Peter’s Pool and other rocky beaches.

In neighbouring Marsascala you’ll find excellent bars and restaurants and a long promenade which bustles with activity in the summer months, while Birżebbuġa centres on the aptly named Pretty Bay sandy beach, surrounded by a public garden and sports facilities, with ancient remains and open countryside all a stone’s throw away.

Any amenities that may be lacking in these small towns are still within easy reach in the larger towns of Żabbar and Fgura, just minutes away by car, with supermarkets, shopping complexes, a private hospital and anything else you may need.

The Western District includes the towns of Rabat, Attard, Siġġiewi and many more. It is within easy reach of all parts of the island but outside the main urban sprawl of the central and harbour areas, offering great quality of life and a vast diversity of traditional and modern properties at prices that make it very popular with first-time buyers and young families.

The large town of Rabat, neighbouring the medieval capital of Mdina and with a history dating back thousands of years, represents a perfect blend of old and new, with traditional townhouses and houses of character in the centre and more modern apartment buildings towards its edges.

Rabat is large enough to offer shops, bars, restaurants and all other amenities, but retains tons of character with winding streets, historical churches and monasteries, and archaeological sites like the ancient catacombs. It is also a gateway to a large area of open countryside, and rural towns and villages like Dingli and Baħrija, which themselves offer a variety of reasonably priced properties for those looking to surround themselves with nature.

Close by, the so-called Three Villages of Attard, Lija and Balzan are popular with families for their quaint, relaxed atmosphere with charming alleys, village squares, and an abundance of public gardens, including the beautiful San Anton Gardens in Attard which host the President of Malta’s residence.

The Northern District of Malta includes the large towns of Mosta, Mellieħa and St Paul’s Bay, among others.

Mellieħa is best known for its spectacular sandy beaches, including Għadira Bay, Golden Bay and Għajn Tuffieħa, which make it a hotspot for both tourists and locals in the summer months, while in the winter the expansive Majjistral Park and Selmun countryside are a big draw for walkers and families.

Apartments and penthouses, some offering wonderful views of the bay, are very common and usually in high demand, but can still be found at more affordable prices than in pricier parts of the island. Parts of the town still retain its traditional character and links to its fishing heritage, while others offer magnificent new luxury villas, many with pools.

Further down the coast, St Paul’s Bay is packed with bars and restaurants along a bustling promenade, with beautiful views of the sea and the uninhabited St Paul’s Islands, which stretches through the nightlife hub of Buġibba and round to Qawra, where you’ll find the national aquarium, swimming spots and large villas. Elsewhere you’ll find apartments in a range of budgets, making this area popular with expats and locals looking for summer homes.

If you’re keen to be closer to the centre of the island, Mosta is a major town with quick connections all around, where you’ll find everything from new apartments to houses of character, all amenities, and in the vibrant town square, the famous Rotunda church, boasting the third largest dome anywhere in the world.

Malta’s smaller, more rural sister island, Gozo is a popular choice with those looking for a quieter, more peaceful way of life, or even a holiday home for the occasional escape from the hustle and bustle of the main island. Property in Gozo tends to be significantly cheaper than in Malta, and the island still offers all amenities, from shopping centres and supermarkets to schools and medical care, while a passenger ferry connects Mġarr harbour to Valletta in just 45 minutes.

Gozo has something to offer everyone, from the capital of Victoria to seaside resort towns and sleepy villages by peaceful valleys. The island is full of famous beaches like Ramla l-Ħamra, spectacular coastal scenery like Dwejra’s cliffs and Inland Sea, world-famous dive sites, beautiful countryside walks, history and traditional architecture.

For those looking for an apartment by the sea, the towns of Marsalforn and Xlendi can offer sea views, lively promenades and an abundance of bars and restaurants, as well as plenty of swimming and diving sites. Characteristic villages like Għarb, Għasri and San Lawrenz offer beautifully converted farmhouses and houses of character, many with pools, while you can also find a range of properties including apartments and penthouses with spectacular views in the hilltop towns of Nadur and Xagħra.

Victoria offers convenience and great transport links with its location right in the centre of the island, as well as history and culture with sites like the medieval Citadel and two famous opera houses that form a vital part of the community.