Ghajnsielem is a municipality on the southeastern coast of the island of Gozo. It has a population of 3,200 residents (March 2014). The name Ghajnsielem means “Peaceful Spring”. The island of Comino is also included in the municipality of Ghajnsielem. It forms part of the Mgarr harbour and it is the first village that greets visitors to the island. It has a typical village with lovely coastal walks. 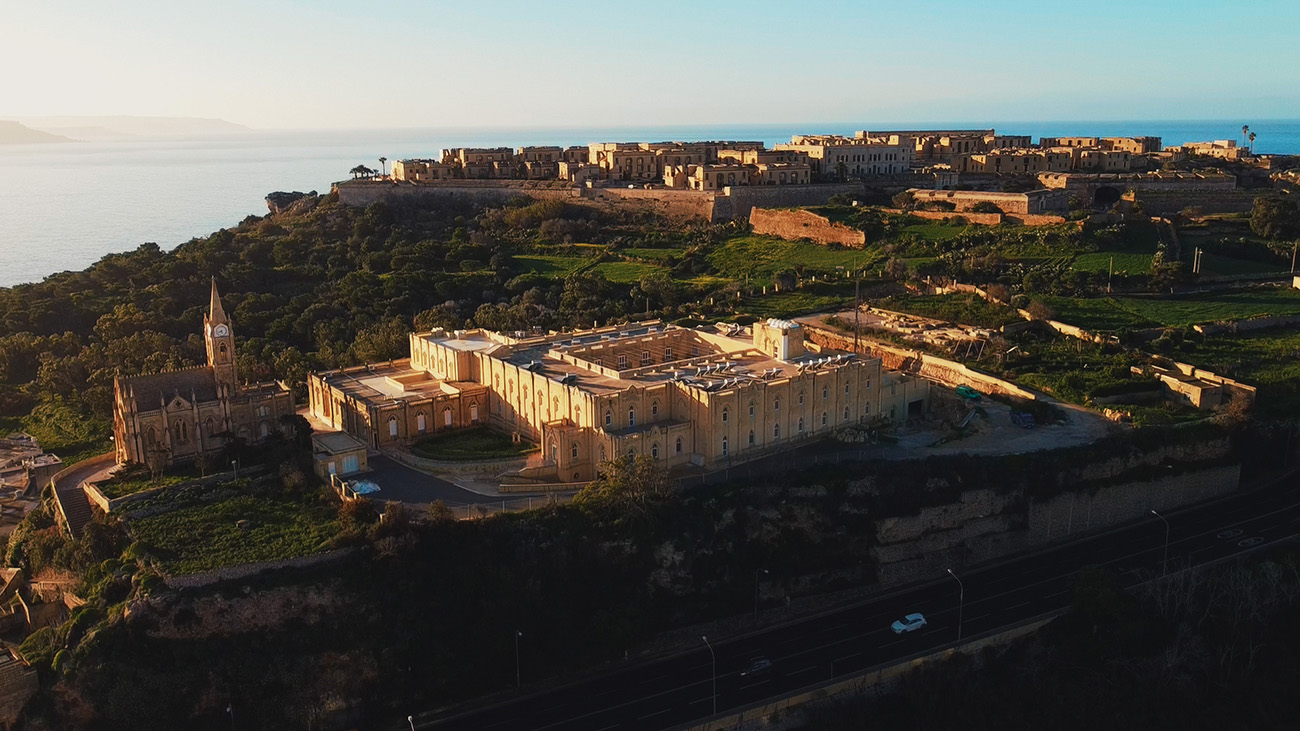 The name Ghajnsielem originated in 1700 when Grandmaster Perellos built an arcade containing public wash basins and fresh water spouts. Sadly in 1954, the historic wash-house was demolished and the spring that gave its name to the village was entombed so as to further enlarge the village square.

The village motto is Ob fontem prosperitas which means the flourishing of a spring – Nistaghnab’nixxiegha ilma.  The springs in the area attracted the first inhabitants that eventually led to the prosperity of the place.  The name Ghajnsielem is also thought to mean the Spring of Selim who was a Turkish Naval Commander who replenished his ship’s water supply from it every time that he sailed by the islands.

What to Do & See in Ghajnsielem?

Our Lady of Lourdes

A visit to Ghajnsielem starts with Mgarr Harbour and fishing village.   This is the first view that one gets of the island of Gozo.  In the harbour there is a bustling activity of ferries, yachts, fishing boats and also the fishermen preparing their nets.

To the left hand side of the Chapel of Our Lady of Lourdes, the harbour is dominated by Fort Chambray which was commissioned by Jacques Francois de Chambray of the Order of St. John in 1749.  The fort was intended to be a new fortified city like Valletta and eventually became the new capital of Gozo instead of the Citadella.  However, the project was not successful as by the time construction started, Berber and Turkish marauders were no longer a major threat thus making rural areas safer for people to live in.

Our Lady of Loreto Parish Church and Apparation Square

In the village centre lies the Lombard-Gothic Parish Church dedicated to Our Lady of Loreto.  The old parish church and the mysterious ‘Pjazza tad-Dehra’ (square of the apparition), where it is believed that Our Lady spoke  to a local shepherd named Anglu Grech lie in the vicinity.  Because of this apparition a statue was erected which was housed in a niche where locals would gather in prayer as the Nadur Parish Church (of which Ghajnsielem was part of( was too far away.  In 1810 the first small chapel was built and the village was established as an independent parish in 1855.  The new parish church as we know it today was consecrated in 1978.  There are ten processions held every year in Ghajnsielem.

St. Anthony’s Church was built between 1902 and 1906 and is dedicated to St. Anthony of Padova (Ta’ Giezu).  The feast of the patron saint is celebrated on 13th June every year.

Mgarr ix-Xini Tower (Torri ta’ Mgarr ix-Xini) is the largest coastal watchtowers that the knights of Malta erected on the island of Gozo.  It was completed in 1661 and its design is similar to the De Redin towers.  These were commissioned By Grand Master Martin de Redin.  It is one of four surviving coastal watchtowers in Gozo.  The other three are Xlendi Tower, Dwejra Tower and Isopu Tower.  Mgarr ix-Xini Tower watches over the entrance to the bay of Mgarr ix-Xini, limits of Ghajnsielem.  The tower was restored in 2000 and a path leading to the tower from the bay was also reopened and restoration was finally completed in 2009.

Comino is a small island which lies between the islands of Malta and Gozo.  It only measures 3.5 sq km (1.4 sq mi) in area.  Comino is named after the cumin seed and the island is the least densely populated area of the archipelago of the Maltese islands.  It has a remanent population of only two residents.  The Blue Lagoon is located between the island of Comino and Cominotto and is the best beach in the Maltese islands.  It is an authentic natural pool where you can swim in the cool crystal waters of the Mediterranean Sea.  Its seabed is home to numerous exotic species and native plants of the area.

Another interesting fact is that every Christmas, Ghajnsielem has a lifesize human crib called Bethlem f’Ghajnsielem.  You can visit this around Christmas time and you can see people dressed up as shepherds, carpenters, millers etc as well as the barn where baby Jesus was born where there is a real live baby.  You can also see many animals in the crib including goats, sheep, donkeys etc.

Ghajnsielem is home to Mgarr Harbour where you can see fantastic views over the harbour as well as lovely scenery seeing as far as Comino and Malta in uninterrupted views.  It is a typical Gozitan village with its simple charms and the core of the village is the Parish Church and Parish Square where the older typical houses are.

Living in a slow and easy pace as you will find in Gozo is appealing to anybody who wants to slow down, settle down and make their home there.  You will find terraced houses, apartments, maisonettes as well as houses of character in this village.  These can easily be made into the home of your dreams.  Many of the properties have fantastic views as Ghajnsielem overlooks the Mgarr Harbour.

Properties For Sale in Ghajnsielem

Properties For Rent in Ghajnsielem