Qala takes its name from the ‘qala’ (port) of Hondoq ir-Rummien. It lies on the eastern side of Gozo and has been inhabited since early times. Its name is both Arabic and Maltese for sheltered haven or bay and this is reflected in its coat of arms – a Gozo boat sailing on rough seas. The development of the present settlement began in the second half of the seventeenth century. The rocky hillsides of Qala enjoy an unobstructed view of the islands of Malta and Comino.

Sites in and around Qala of historical interest include salt pans, a well-preserved windmill, cart ruts and prehistoric remains.  The first settlers in Gozo probably lived in the caves known as Il-Mixta on Ghajn Ghabdun plateau.  A temple might also have been erected in the present Qala area.  Nowadays, only a menhir remains but pottery sherds suggest that the stone is possibly the sole surviving element of a megalithic structure of the Temple Period. Qala’s coastline is mostly rugged except for a few sheltered inlets such as Hondoq ir-Rummien. Among the many sea caves found along the coast is Ghar Minka which is accessible only by boat.

In 1920, Punic burials were discovered at Fuq il-Gherien close to Ta’ Tocc.  Next to the chapel of the Immaculate Conception, two punic tombs with pottery remains were unearthed in 1964.  Punic and Roman remains have been found in various places in the village from time to time, the most prominent of which is the discovery of ancient graves near Marga valley.

In the 1730s the defence of the eastern shoreline of Gozo was greatly enhanced by the construction of St. Anthony’s Battery at Ras il-Qala.  On 10th June 1798, the French, under General Napoleon Bonaparte occupied Malta and Gozo.  The inhabitants of Qala and their cattle rushed to Fort Chambray.

The British took the Maltese Islands under their protection on the 5th September 1800 then on 16th September 1864, Gozo and Comino became an autonomous diocese.  In 1872, Qala became a parish on its own.

You can join the villagers in celebrating the feast of their patron saint on the first Sunday in August.  The village of Qala has a local brass band known as lte ad Joseph which plays marches and stage concerts during the festive week.  An international celebration is held three times a year: Christmas Edition, Easter Edition, Feast Edition.  Then there is also the International Folk Festival which is very interesting. This is spread over four days and has a mix of traditional local and foreign folk music, song and dance.

Places of Interest in Qala?

The village parish church is dedicated to St. Joseph and was built by Dun Guzepp Diacono between 1882 and 1889, while he was serving as Parish Priest of Qala.  The style of this church is baroque as are many churches on the island.  The village feast dedicated to St. Joseph is celebrated every year in early August.  The foundation stone of the parish of St. Joseph was laid on 19th March 1882 and the church was consecrated on 8th May 1904.

The Chapel of the Immaculate Conception

This chapel is situated on the way to Hondoq ir-Rummien and is one of the earliest Marian shrines on the island.  It dates back to 1575.  It is dedicated to the Immaculate Conception of the Virgin Mary and the feast is celebrated on the 8th December which is a public holiday on the Maltese Islands.  The statue was sculptured in Marseilles by Gallard et Fils in 1887.

The chapel was enlarged in the early 1650s and on 28th April 1688, it became the parish church of the eastern part of Gozo, Qala, Nadur and Ghajnsielem and remained so for about 12 years.  From February 1872 to February 1889 it served again as a parish church of Qala. It was consecrated on 21st May 1950.  The inside was refurbished and gilded between 1982 and 1988.  The altarpiece shows God extending his special protection to the Immaculate Conception.  The Virgin Mary was crowned on 1st August 1954.

Hondoq ir-Rummien is a small sandy beach which can be accessed from the village of Qala.  It lies opposite the island of Comino and its crystalline water makes Hondoq Bay very popular amongst the local population in summer.  Apart from swimming, Hondoq Bay is also ideal for diving, especially for beginners.  On summer evenings many local families stay late at Hondoq and relax by their smoking barbeques enjoying the cool summer breeze.

The earlier farmers went in search of agricultural land and the present area of Qala with its fertile soil were soon to be inhabited.  There is lovely countryside to be seen around Qala as well as a fantastic view of the islands of Malta and Comino.  From the Qala Belvedere and from the small courtyard in front of the church apart from the islands, you can also see the ferry coming and going between the islands of Malta and Gozo as well as the little boats running between Comino and Gozo.  This church faces Comino and legend has it that it was built so that people on that island could follow Holy Mass from across the straits when rough weather precluded a priest from crossing there. 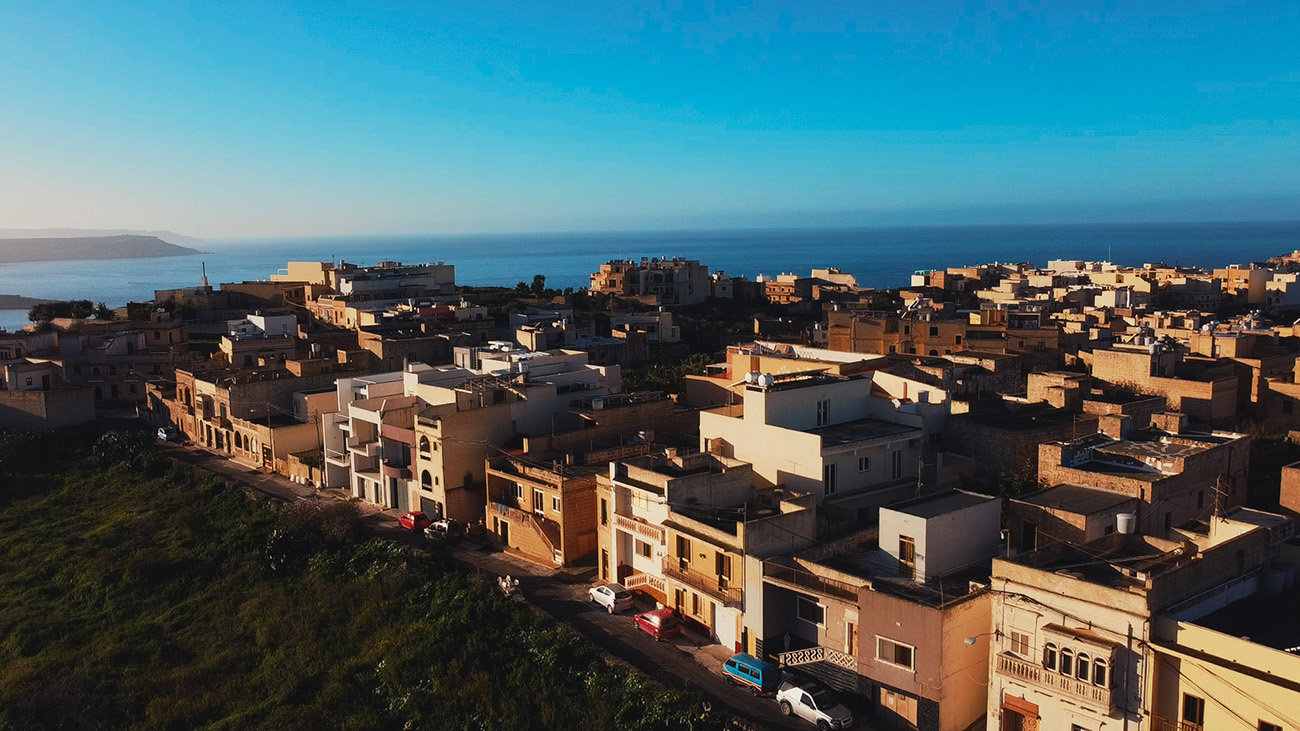 Living in Qala is an ideal place if you are looking for a seaview as well as a country view.  You can have both views from the same property.  It is just a question of finding the right property.  You can find many properties in the old tradition style here, having stone balconies and courtyards in the middle of the house.  You can find properties with terraces to enhance your seaview and also more modern properties with excellent sea views too.  From houses of character to apartments, from terraced houses to penthouses, Qala has a delightful choice of properties for the taking.

Properties For Sale in Qala

Properties For Rent in Qala