If you fancy living by the sea close to a long sandy beach with a Maltese village overlooking the background, an ideal location to check out is Mellieha. Located in the northwest part of Malta, Mellieha has a long history that dates back to Neolithic times when the first inhabitants lived in several naturally formed caves in the area. Mellieha is a popular tourist destination during the summer months. It is well known for its beaches, with the most well known being Ghadira Bay and Golden Bay. Cirkewwa is also popular as a dive site, and it includes the wrecks of MV Rozi and the P29 patrol boat. 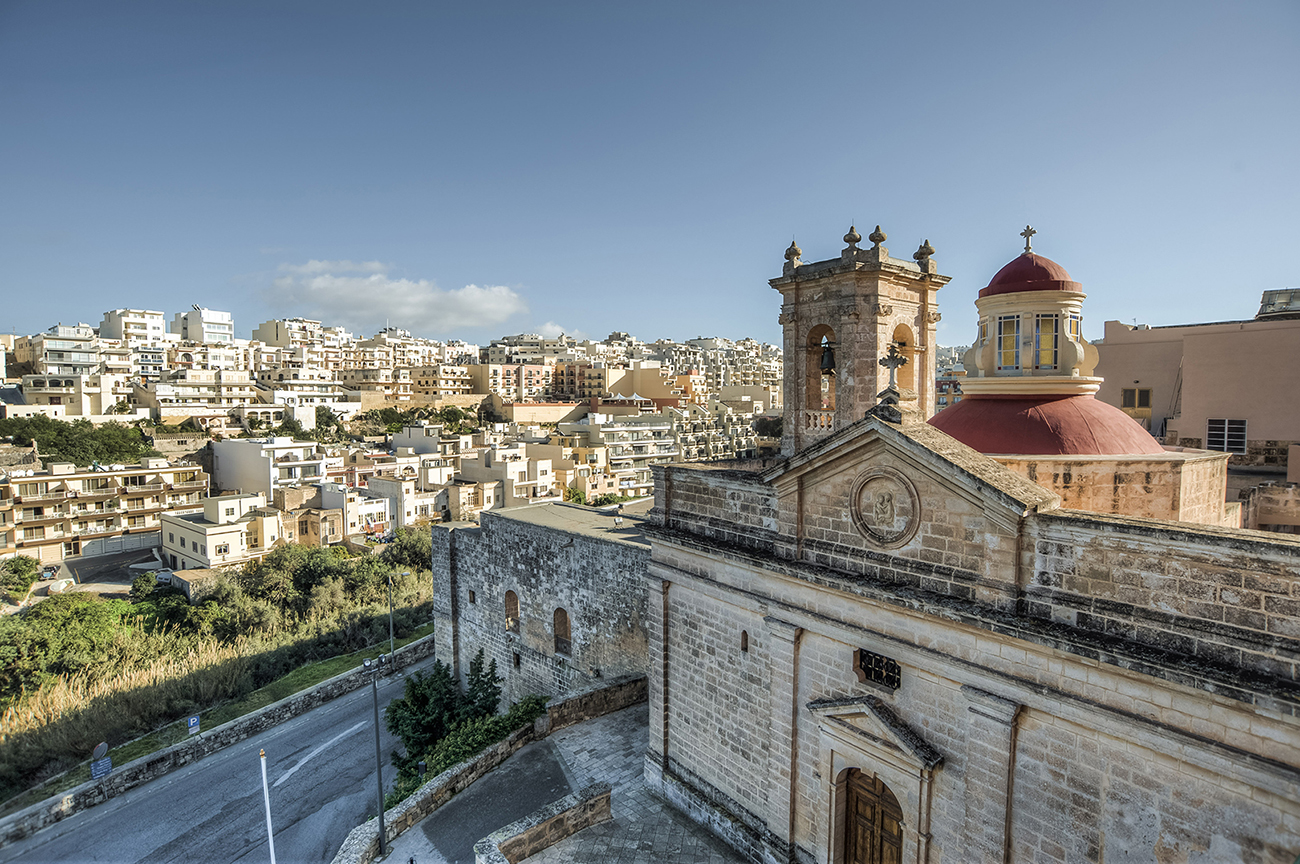 The name Mellieha is derived from the Semitic root m-l-ħ, which means salt. This is probably derived from the ancient Punic-Roman salt pans which existed at Mellieha Bay. The Ghadira Nature Reserve now occupies the site of the salt pans.

Mellieha was first inhabited around 3000 BC, during the Neolithic period. Several megalithic remains have been found, including the temple of Ghajn Zejtuna, as well as several caves and tombs, in which tools and pottery fragments were found.

During the Roman period, troglodytes began to live in the caves of Mellieha’s valleys. The cave settlements continued to exist during Byzantine rule but were abandoned in the early medieval period.

Mellieha was one of the first ten parishes of Malta. It still existed in 1436, but it was abandoned soon afterward in the late 15th or early 16th century since the north of Malta was no longer safe due to raids by Muslim corsairs.

The northern coast of Malta began to be fortified in the early 17th century. The first fortification to be built in Mellieha was Saint Agatha’s Tower, which was completed in 1649. This large tower was built on Marfa Ridge, overlooking Mellieha Bay, with clear views over to Comino and Gozo. The smaller Ghajn Hadid Tower and Armier Tower were also built at the limits of Mellieha in 1658.

The town of Mellieha stands on a group of hills on the northwest coast of the main island of Malta. Mellieha proper consists of the areas of Mellieha Heights, Santa Maria Estate, il-Qortin, Ta’ Pennellu, Ta’ Masrija, and Tal-Ibraġ. The nearby villages of Manikata and Selmun also fall under Mellieha’s jurisdiction.

In 2009, Mellieha was awarded the title of European Destination of Excellence due to its sustainable initiatives.

What to do and see in Mellieha?

A key site to visit is the church that stands perched high on top of the town center’s hill. The baroque-style church constructed in the 19th century is known as the Sanctuary of Our Lady of Mellieha. It stands above a crypt, which was initially a natural cave. Inside, one finds an ancient fresco, painted in the Byzantine style and believed to have been created in the early medieval period. However, legend holds that it was painted by St Luke when he was shipwrecked on Malta together with St Paul.

In the limits of town one finds L-Ahrax tal-Mellieha, a vast expanse of land where wild garigue and history come together. This is where one can see the Red Tower alias known as Fort St Agatha. This was one of seven towers constructed during the times of the Knights of St John. Today this watch post can be visited and offers exceptional views from the top of the tower.

Popeye Village located in Anchor Bay is another superb and surprising attraction found in Mellieha. This is the film set of 1980 film production ‘Popeye’ which starred Robin Williams in the leading role of Popeye. Today the village’s quaint wooden structures still stand and serve as a tourist attraction all year round.

Mellieha is the site of two major nature reserves – Ghadira Nature Reserve which is a bird sanctuary and Foresta 2000 which is a natural habitat of Mediterranean woodland.

As a self sufficient town, Mellieha offers all facilities and amenities required for modern comforts. Shops, supermarkets, boutiques, souvenir shops, a wide variety of restaurants, pizzerias, bars and pubs. The area is also rish in hotels, apart hotels and holiday rentals.

Swimming in the North of Malta – Ghadira Mellieha Bay

Apart from the local Primary School which is one of the best in this part of Malta, the area of Mellieha offers a number of English language schools which attract a considerable crowd of international students.

The Real Estate market is thriving in Mellieha. Thinking of relocating to a seaside town has its advantages. With various properties to choose from, people benefit from an all year round vacation atmosphere, which blends in excellently with the residential areas of town. 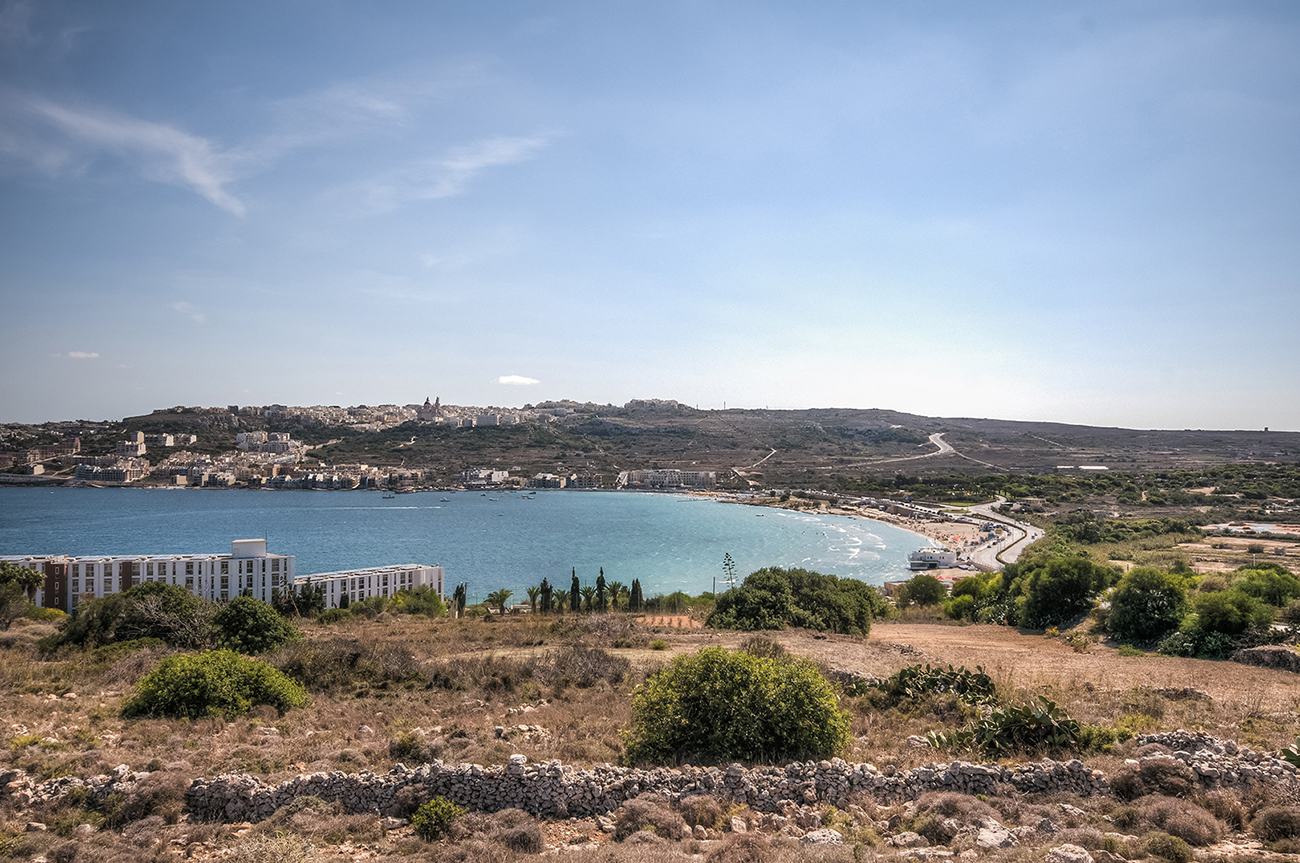 Residents in this town enjoy living in some of the loveliest residences, this side of Malta. The locality offers unique opportunities to purchase a first home with magnificent sea views or country views.or one which is steeped in history within the centre of town.

Apart from that, the location has several new buildings in the form of designer apartment blocks, which are attracting second home buyers or buyers who would like to invest in a holiday home that can double up as a rental investment. Whether one lives in the heart of the old town, on its outskirts closer to the sea, or somewhere secluded but still enjoying a view of the bay or the surrounding countryside, this location is one step away from Cirkewwa which ferries one out to Gozo. Other locations in the vicinity are Xemxija, Armier and Paradise Bay. Below find a number of links that will take you to search results based on your budget and the type of property you are looking for.

Properties For Sale in Mellieha

Properties For Rent in Mellieha