RE/MAX International recently held its annual mega convention in Las Vegas, one of the top locations ready and able to welcome the thousands of associates and real estate affiliates who attended. Amongst these was a modest sized Maltese contingent representing RE/MAX Malta, including three from RE/MAX Real Estate Specialists who walked away with some truly impressive awards.

Mauro Sammut is the Branch Manager and co-Franchise Owner of the Tigne Point and Portomaso offices. “This is not my first time in Vegas for a RE/MAX convention, indeed it is my 4th. I have now been working with RE/MAX since 2011, having previously worked with another real estate company. Before that I was working with Air Malta in a post involving Economics of Aircraft, a job which really took me places since I travelled a great deal.”

Eventually, after joining the RE/MAX ranks, he purchased the RE/MAX Real Estate Specialists franchise along with two other colleagues, starting with an office in Tigne Point. The branch is relatively small, with only seven members on the team, but it certainly has been achieving a lot. “I don’t do sales personally, but I do assist people to secure them by leading and guiding them along, giving a helping hand and making things happen. I like to go the extra mile which is what gives my performance that extra edge. I tend to go out and meet people rather than stay in the office and send emails. I close deals that way, and I must say my routine is non-existent….. My daily schedule is composed of ad hoc appointments.”

What about Vegas? “Well The Strip is impressive…. All these mega-sized hotels make it one of the few places on earth which can cater for some 10,000 people for a single convention at one go. And there are many simultaneous conventions, so Vegas is always brimming with people, people and more people. That is just one exciting facet of being in Vegas. There is also the socialising amongst associates, which leads to excellent networking opportunities. The organisation of the event is immaculate. Apart from speeches from the likes of RE/MAX’s own founder, there are also personalities who attend to speak of inspiring personal experiences. Then there are the motivational speakers. I go specifically to attend mentoring classes by Brian Buffini – he is a star in what he does, giving me the drive to jump up from my seat, come home and start working.”

“People at these conventions generally think we are doing a fantastic job in Malta, due to the number of awards we bring home and in view of our population ratio. In general, they look up to us and admire what we manage to achieve here.”
Although he did not get an award for his performance on a managerial basis, Mauro says, “Managers do not get awards as yet, but this possibility is now being considered. However I must say it is inspirational seeing my colleagues receive awards for themselves and for the office.” 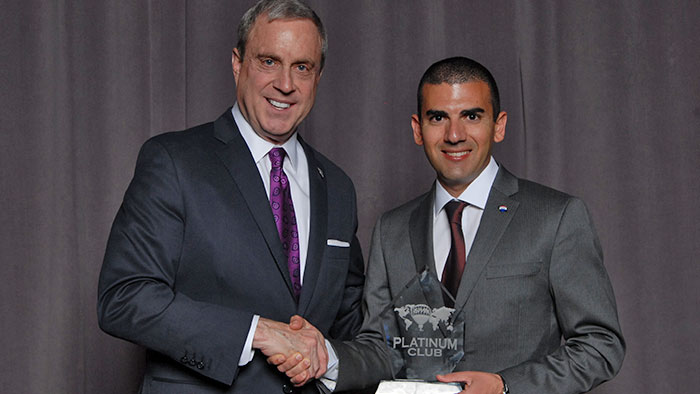 Accompanying Mauro in Vegas was Philip Incorvaja, who is co-franchise owner of the RE/MAX Real Estate Specialists offices. He was top producer for RE/MAX Malta during 2013 and 2014, and has once again been to Las Vegas to receive a Platinum Award. Since joining RE/MAX Malta, he has received several awards and been to Las Vegas three times for just as many RE/MAX Conventions.

How does one get to receive such a prestigious award? “It boils down to hard work and commitment, but not only. I am very flexible in the type of client I handle, but at the same time, I tend to concentrate on specific areas and in certain types of property. This helps me acquire specialised knowledge. The client is all important. I like to treat every client on the same basis – with extreme respect, whilst adapting to the needs of particular clients who might be more demanding.  All clients however, expect good service, and I believe that one way of standing out amongst other agents is to have the inclination of providing excellent service. Coupled by stronger knowledge in a determined field, one can forge a way to get very good results.”

Philip provides his own and first-hand impression of Las Vegas. “Las Vegas is full of life. I always get a good feeling and a very positive one of fulfilment from each visit. When I receive awards, these feelings are obviously there, but that is not the only reason why I go to Las Vegas. I don’t just go to pick up an award – there is more to it than that, much more. I bring back a lot of energy, transmitted via certain speakers who give us so much invaluable advice…. speakers including Mel Robbins and Brian Buffini, for instance, who were present this year. I must point out that any RE/MAX agent can go and attend these conventions, not just those who receive awards. I cannot stress enough that I heartily recommend attending to everybody on a 100% basis – it is truly an incredible experience that is ultimately beneficial on a personal and professional level. You gain knowledge, you socialise, you have fun and you get the chance of serious entertainment, the likes of a visit to the Grand Canyon or being at a show by amazing performers such as those forming part of the Cirque du Soleil.  These are all excerpts of the experience which ignite me with the energy required to keep up the pace. I come back ready to inject even more energy in my performance.” 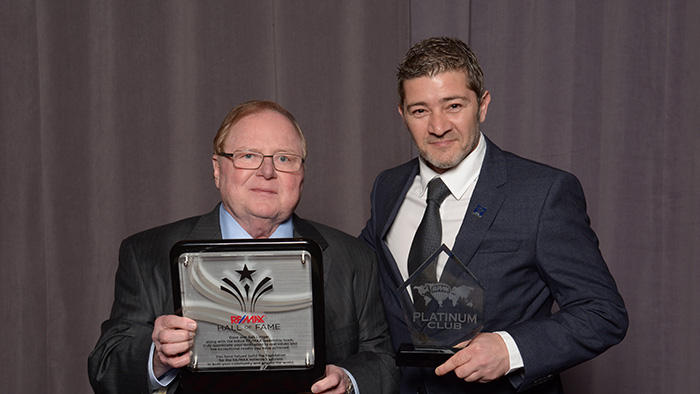 Another member of the same office, another awardee, Mark Micallef is a senior sales associate based at the Tigne Point office. He returned to Malta the proud holder of two awards. In Las Vegas, he was awarded the ‘RE/MAX Hall of Fame 2016’, making him one of a small handful of agents in Malta so far to have achieved such an award. He also received a Platinum Award.  “I received several other such awards in my career during all the years I have been with RE/MAX – nine years to date. I specialise in localities ranging from Sliema up to Madliena and a few central areas, special designated properties, waterfront locations and villas, as well as delving into development sites on occasion.”

This is the 8th convention, which he has attended so far. For Mark, one of the key and most important factors is the networking which happens between the agents, associates, managers, and franchise owners who are present at these events. “The highlight of what I bring back with me from such conventions is an electrifying feeling. It is utterly amazing to find oneself amongst thousands of other agents from around the world. Internally, we use the referral system which simply means that we can refer clients to each other and get a cut off every deal, and that can also happen between international connections. We learn a lot from each other because whilst every country has different ways of working, we can exchange ideas and share experiences.”

Speaking of the convention set-up he says, “The organisation is tip-top, and we have four days brimming with varied classes, both in the morning and in the evening. We pick out the sessions we wish to attend each day, and the selection is pretty copious considering there are between 20 to 30 classes on any given day. Mornings start off with a super-session held in the arena and our speakers are not just real estate agents, but special people such as Magic Johnson who attended last year.  The awards night is a gala dinner with lavish entertainment. But events are not all happening indoors. We had sports activities, charity auctions, tournaments and fun nights. Last year, for instance, we had the international band Aerosmith giving a concert for us all.”

He admits that all awards are exciting. “I used to play music in public and on stage, and therefore am quite used to being in front of an audience. However one is always somewhat tense before going up on stage… fortunately I never froze. At the end of the day, this convention motivates me, because it is magical to see how big RE/MAX really is – one big family – and every year it feels like one huge reunion. Whilst I get to have the time of my life, I simply cannot wait to get back to work here at home.”

From what these gentlemen recount, the MGM Grand Hotel & Casino in Las Vegas Nevada was certainly a very special backdrop for this real estate event of the year. Whilst the educational events, the global networking events, the world-class speakers, exhibits, concerts and more are all documented in the programme, the words of those who actively participated are what provides the ultimate inspiration for other RE/MAX Malta members. Aspiring to be there next year, whether one walks away with an award or not, is a dream worth following.