Located in the South Eastern region of Malta, Paola (Rahal Gdid in Maltese) meaning “New Town” has a population of 8,706 inhabitants (2019). Paola lies about 5 km from the capital city of Malta, Valletta and is a commercial centre in the Southern Harbour area of Malta which is embellished with gardens and open spaces. It forms part of a single area together with Tarxien and Fgura. Paola is named after Grand Master Antoine de Paule who laid the foundation stone in 1626. 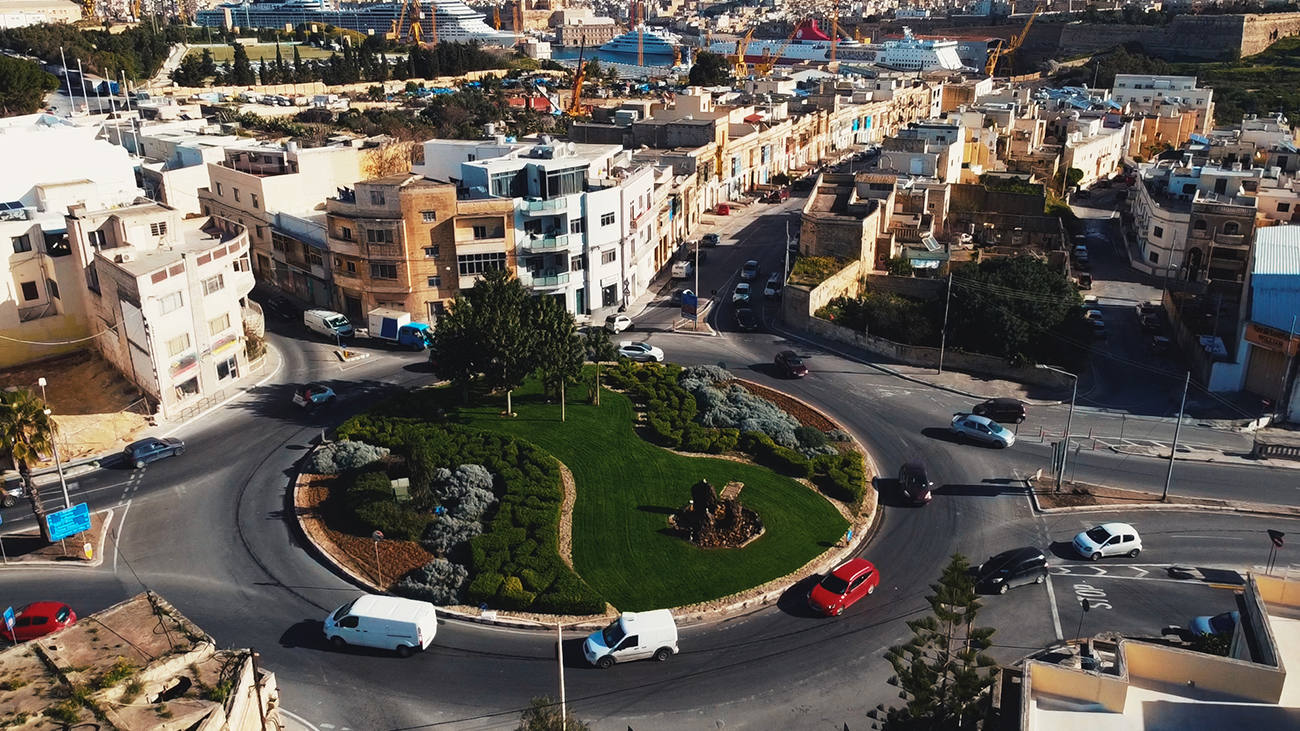 Paola remained a small village until the late 19th century, when it grew rapidly as a residential district for workers from the adjacent Grand Harbour dockyards.  It has a well-preserved Neolithic temple and the Hal Saflieni Hypogeum (catacombs), discovered in 1902 and designated a UNESCO World Heritage Site in 1980.  Grand Master Antoine de Paule was appointed Grand Master of the Order of St. John on 10th March 1623, when he was 71 years old.  On 20th July 1626, to address a growing population, he set up a new town on the hill known as Tal-Gherien (of the caves) which was named Casal Nuovo (new town) since it was founded during the rule of the Order.  The town was later named Casal Paola to bear the family name of the Grand Master.  The town is still referred to by this name today.  The town’s coat of arms originally consisted of a white and red octagonal cross contrasted against a white and red background.  During the Military Order, the town became the spiritual successor of the neighbouring town of Tarxien.  To encourage migration to Paola, Grand Master de Paule gave indemnity to the debts of the families who moved there.

Paola is renowned for the Hal Saflieni Hypogeum, the Basilica of Christ the King (the largest church in Malta), Antoine de Paule Square, the Good Friday procession and its footbass club Hibernians FC run by the Bezzina family.  There is also a mosque found in Paola, the Mariam Al-Batool Mosque, the only mosque in Malta and Malta’s correctional facilities (Corradino Prison) and the largest burial grounds, the Addolorata Cemetery are also within the limits of Paola.

In Paola there are two parish churches, one dedicated to Christ the King and the other one dedicated to Our Lady of Lourdes.  The feast of Christ the King is celebrated on the fourth Sunday of July and the feast of Our Lady of Lourdes is celebrated on the first Sunday after the 17th August.  The parish also has a Franciscan church dedicated to St. Anthony in Ghajn Dwieli which is a zone of the parish of Paola.  The oldest and first parish church in Paola is St. Ubaldesca Church.  This church underwent restoration in 2008.  Villa Perellos named after Grand Master Ramon Perellos y Roccaful is a local historical landmark.  Several megalithic remains have been found in the locality although Paola was founded in the 17th century.  Several other remains from pre-history to classic antiquity were also found in Paola.

What to See and Do in Paola?

The Hypogeum is a large complex of rooms hewn out of limestone and 11 metres (36 ft) below the surface and has been designated a UNESCO World Heritage Site. This site was used as a burial site and also as a temple.  |The site was discovered by accident as house foundations were being excavated and were almost kept secret for some time.  A wealth of archaeological material including pottery and human bones, personal ornaments such as beads and amulets, little carved animals and larger figurines including the Sleeping Lady were recovered here.

The Kordin Temples were made up of three temples.  They were located on a high plain overlooking the Grand Harbour.

Temple I was excavated partly by A.A. Caruana and later by Sir Themistocles Zammit in 1908 and finished by T. Ashby and T.E. Peet in 1909.  Unfortunately it was completely destroyed by air raids during World War II.

Temple II was first investigated by Caesare Vassallo in 1840.  In 1892 A.A. Caruana started to excavate the site properly.  Albert Mayer continued the excavation in 1901 and finished by Ashby and Peet in 1908-9.  It was also damaged during the war and is of particular interest since pottery from all phases of the Temple period was found here.  New buildings have now been constructed here.

Temple III is the only temple in Kordin still in existence today.  In fact it is of the standard Ggantija-phase 3-apse design.  One of the most noted features of this temple is the 2.75 metre long ‘trough’ lying across the entrance to the left apse.  Temple III is in a walled area next to the Church of St. Anthony and is kept locked to give it maximum protection.

During his rule, Grand Master de Paule built a church on 31 July 1629 in the town dedicated to St. Ubaldesca and this became the first parish church in the town.  In 1900 this church was enlarged to accommodate the growing population and Paola became a parish in 1910.

There is a wide variety of properties available in Paola including apartments, maisonettes, etc. There are also many interesting houses of character which can be restored to modern living and yet keep their autonomous characteristics such as wooden beams, typical Maltese balconies and Maltese tiled floors as well as large terraced houses with beautiful gardens which would make lovely family homes.

As Paola is not one of the expensive towns for property in Malta, it is becoming more and more popular with buyers seeking a property at an affordable price in a central area with a modern shopping centre.  The feast of the parish church/basilica of Christ the King is on the fourth Sunday in July and is very popular with the locals.  A procession takes place on that day with locals carrying the statue around the streets of Paola, outdoor market and food stalls, merriment and fun is to be had by all.  You can see the church all lit up in all its glory as well as the fireworks display which is synonymous with the local Maltese festas and which light up the Maltese summer skies.

Properties For Sale in Paola

Properties For Rent in Paola