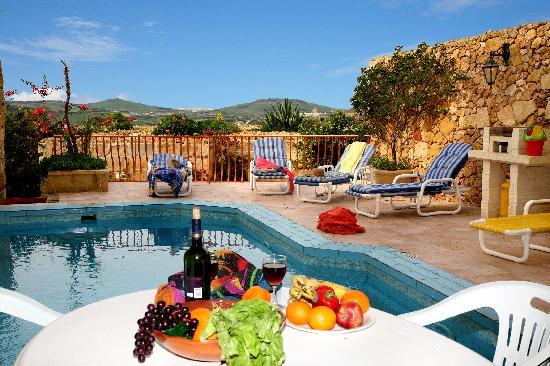 Find a farmhouse in Gozo by following our tips to see which type of farmhouse you should book when visiting Gozo on holiday or even to buy.

Once the ground floor rooms of your farmhouse have been examined, it is time to move to the first floor of your  property in Gozo. Worn and weather-beaten stone stairways lead to the upper floor, sometimes shaded by a trellis which may or may not hold an ancient grapevine.

Some of the smaller properties in Gozo, in particular farmhouses,  possessed only one room on the upper floor and this normally served the purpose of airing hay, the necessary fodder for the larger animals on the farm, or simply just to feed the mare which took the farmer to town. However larger properties in Gozo included a number of other rooms, probably added over the years to make space for an extended family. Rooms on the upper floor typically have a high ceiling and this served the purpose of allowing the summer’s heat to rise up and allow its ventilation, thus keeping the rooms fresher than they would have been had the ceiling been any lower. Each of the rooms would have had a small aperture by way of window, overlooking onto the inner courtyard. It is not uncommon to find that these rooms were also inter-connected since privacy was not particularly sought after in older times.

Privacy was however sought in the ‘master’ bedroom where some of the very old farmhouses used to have a birthing chamber, a kind of alcove in which the females of the family gave birth. The alcove allowed enough space for the doula or midwife and other women to assist the mother during the birth, and also have space for the mother to keep the baby close by in a cot. These rooms may include small wall niches which were typically useful to hold oil and eventually paraffin lamps. Smaller niches were used to hold a holy statue plus candles, a sure sign of the Christian devotion of the farmhouse inhabitants.

The farmhouse roof, always rigorously flat as is traditional in these Mediterranean islands, was roofed in a singular manner which surprisingly enough, was a task delegated to women. Known as ‘il-ballata’ these women had the task of covering the stone roof with broken particles of clay. This clay was retrieved in a very eco-friendly manner by buyers who toured villages and towns and collecting broken pottery, clay pots and pans as well as flower pots and water pipes. These were recycled by being broken into minute particles that were then mixed with lime and water and applied to the roof. The women, five or six to one roof, would literally beat the mixture onto the roof to make a solid cover, whilst singing traditional song. Such roofs, if structurally safe, remain particularly sturdy and repel water excellently. Therefore it is of especial value to find such a traditionally made roof still intact and resisting the elements today.

It was habitual to line the roof with pumpkins that were kept in the sun all summer long to mature until the next soup-making season came along. Yes indeed, the farmhouse you have just toured may have fallen silent in the here and now, but it was abuzz with life once, so many years ago. Bringing your property in Gozo back to life may well be your next mission.

This article was written by Marika Azzopardi, a freelance writer and journalist. A frequent contributor to national English language papers and magazines, she writes about a bevy of topics including art, people and life in general. She is also the author of children’s books and short stories, delving into adult fiction from time to time.